During the period 1914-20(1090-1097ME) Divan Sri Sankara Iyer who was the Peshkar of Cochin, during his official visit saw the Ganapathy idol in a pond.And he brought the idol and installed below banyan tree, behind the Thiruvambadi temple. He was a resident of Thiruvambady. He then suggested that the community members should make a temple for the Mahaganapathy idol. The floor below the tree is used for this good purpose. After that, Sri Lakshmana Vidhayar led the shrine of Lord Ganesha in the small sreekovil of the temple.
Initially, there was only daily Pooja in the temple. Then Vinayaka Chaturthi , Painkuni Uthram, Sri Rama Navami and 11 days of Maharudram at the time of Navarathri from 1942 onwards started from the requests of Sankara Iyer's family members and the members of the community. This Maharudram started as a pray full yajna with the help of well-known members of our community for pain relief and scarcity of food from the Second World War and quit Indian struggle in 1942.
In the early stages, with the lack of a specified place or kitchen, Sri Lakshmana Vadhiyar led Maharudram with the help of nearby Vedic philanthropists. At that time whoever performs the Samaradhana pooja(in the days of Maharudra) was conducted it in their own houses.From 1962 onwards Parishat’s Kalyanamandapam is using for conducting Samaradhana.
After a long time, the "Parishath" renamed as “Parvathi Sankara Maha Ganapathi Parishad” on the wish of Shankara Iyer's family. As a memmory of Mrs. Parvathy Ammal , the wife of Shankara Iyer. Then the Parishath was registered in the registrar of Joint Stock Companies Thrissur(Regd as no 5 of 1097).
These were some persons who worked mainly for upliftment of the parishad.
Sri. A S Krishna Iyer, Sri. Justice P K Subrahmanya Iyer, Dr. V N Krishna Iyer, Sri .Ambamany Iyer, Sri. C S Swaminadha Iyer, Sri. T S Ananthakrishna Iyer, Sri. T S Vaidhyanadha Iyer, Sri. C P Venketeswara Iyer, Sri. T V S Mani Iyer, Sri. T S Konthei, Sri. M P Vaidhyandha Iyer, Sri. K R Sankaranarayana Iyer, Sri. N K Dharmarajan, Sri. N K Neelakanta Iyer,
&nbspWeek for the citizens of Trichur, but a most arduous and trying one for His Highness.it was perpetual round of engagements and visits. Sunday the 30th Chingam 1111,It was a very busy day for His Highness At precisely 7.30 am. His Highness proceeded to worship in the Thiruvambady temple, a few furlongs to the north of the palace. The temple is decided to Lord Sree Krishna and is one of the two temples, which have made the Trichur Pooram festival what it is today. The temple likes its great Pooram rival the parmekkave temple, Dedicated to the goddess Kali, is a private managed institutions, under the care sand supervision of the Desakkars or the Caste Hindu citizens, who inhabit the northern and western portion of the town of Trichur. The Paramekkavu temple being under the management of the caste hindus, who occupy the southern and eastern sections of the town. At the entrance of the temple, His Highness we received by the committee of the management and the leading in habitants of the place. The temple was beautifully illuminated and kept scrupulously clean, in the way in which Malabar temples alone are kept clean. His highness after worship made costly offerings to the temple. His Highness next proceeded by the eastern gate to the adjacent Ganapathy temple belonging to the Brahmins of Vadakke Angadi.The Brahmins of the place, who had mustered there in large numbers offered His highness hearty welcome and their blessings. His highness spent a few minutes with them and returned to the palace at about 08.30 am. The whole of that morning till about 11.00 am His Highness was engaged in granting interviews to a large number of persons who had come from far and near to pay their respects to His Highness.
Sri Deva Raja Ghanapadikal(known as Mysore Ghanapadikal) was highly motivated in temple aspects. The place for Kalyanamandapam of Parishath is given by the South Manavar family in Naickanal. Sri TVS Mani Iyer decided to give the place of the dining hall in the western side of Kalyanamandapam hall and the parish has succeeded. 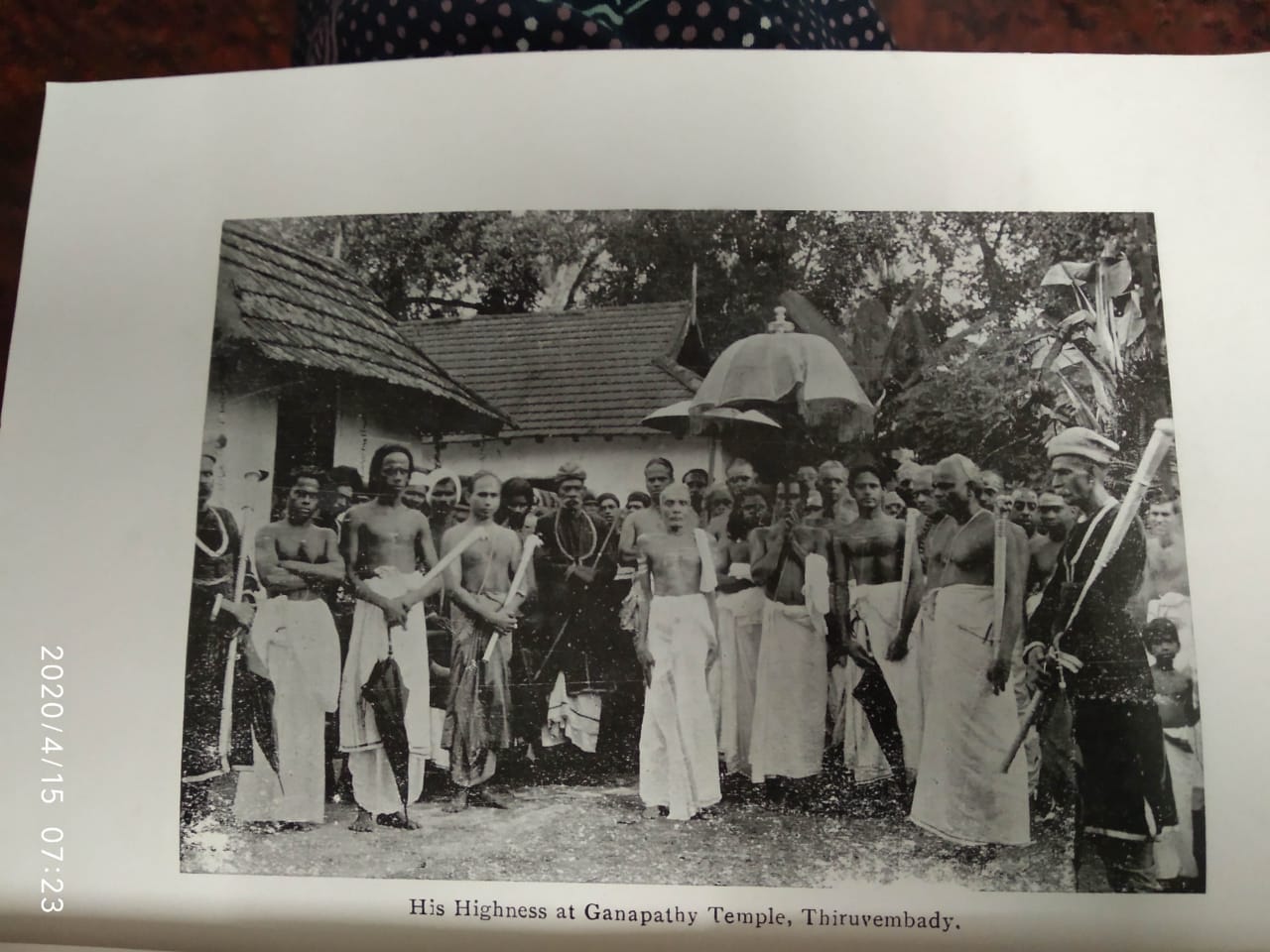